As printer to King George II and to the University of Oxford between 1711 and his death in 1742, John Baskett was responsible for printing many fine books. However his name is remembered above all for his 1717 imprint of the Holy Bible. This particular edition, which contains many neo-classical engravings by James Thornhill and Michael van der Gucht, could have been one of the highlights of Baskett's career. Instead so many printing mistakes were made that people referred to his Bible as a "Baskett-ful of errors." One of the most famous misprints occured in the page heading in Luke 20:9, where "The Parable of the Vineyard" became "The Parable of the Vinegar", hence the nickname of 'Vinegar Bible.' This Bible I offer is the Rare of two Edition, two distinct occurred, Edition 'A' & Edition 'B';- A is more common than "B' I offer the Edition "B' in 2 Vols. The Old Testament 1716 And The New Testament 1717. In "B' Edition the General Title Page is by Sturt in 'A' its by Du-Bose. The Edition I offer is the very Rare 'B'... It's Rebound in dark blue cloth, the Bibles are large Folios and very heavy, Illustrated throughout in stunning condition;- Missing the last page only, IHerbert;- 943-B
I HAVE 2 COPIES OF THIS BIBLE. 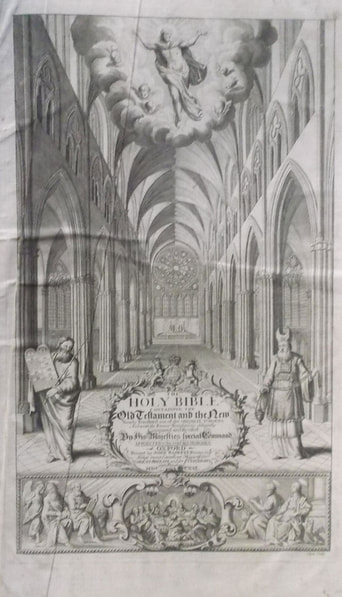 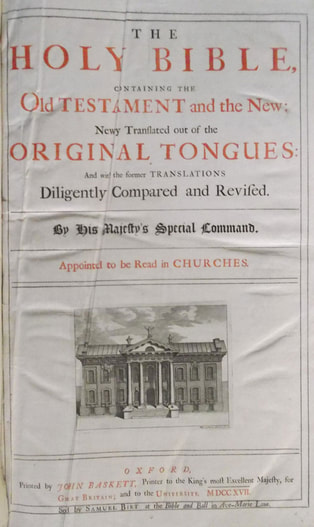 The Self Interpreting Bible 1820 Folio

by John Brown;- Published by Thomas Kelly;-London 1820;- Folio ;- The Old Testament & New Testament are published in the same year 1820. Of all the Folios I’ve seen over the years, 40 years..This Stunning Hand-Coloured Illustrations are the most beautiful I have seen..over 250 Hand-Coloured Illustration and Maps through-out the Bible . Original black leather binding, with gilt decorations to both the spine and covers. The best copy I have ever seen. Needs a little work on the binding and TLC. 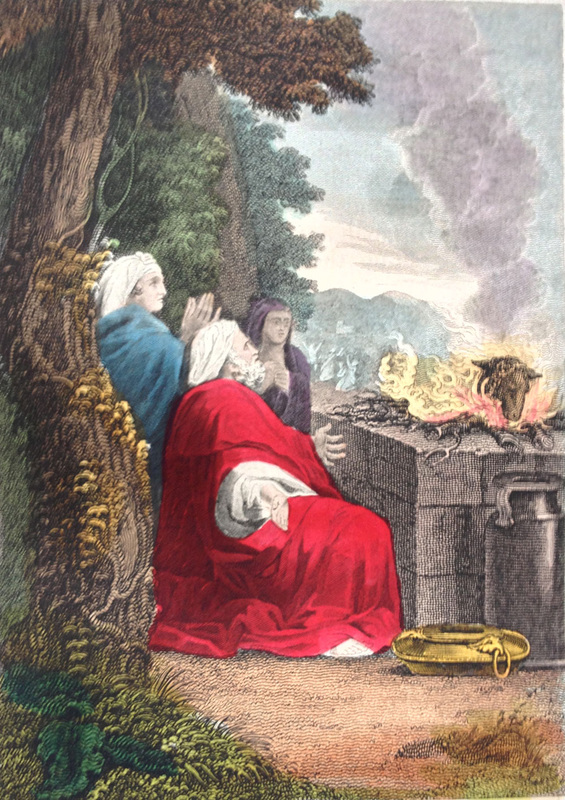 With Copper Plates This is the Christian's New and Complete British Family Bible: being a new, clear, full and universal exposition and commentary on the Holy Scriptures, illustrated with valuable notes and annotations. It was compiled by Paul Wright in 1792. it contains 80 copper Plates, and Maps;'Illustrated with most valuable notes and annotations, theological, critical, moral, divine, historical, geographical,., systematical, biographical, practical, admonitory, chronological and explanatory'. With a frontispiece and numerous further stunning plates throughout, including a depiction of the creation of Heaven and Earth, a new map of the garden and land of Eden, and other illustrations of Biblical text. 'All the difficult and obscure passages are clearly explained; the seeming contradictions in every respect reconciled; the mis-translations corrected; the errors of former commentators rectified and pointed out; the objections of deists and infidels answered; the prophecies and parables faithfully elucidated; sublimes passages properly noted; the offices of the Jewish and Christian churches thoroughly investigated; every minute circumstance of the revealed will of God faithfully recorded; all proper names together with scripture weights and measures, accompanied with the necessary interpretations and illustrations and the whole of divine revelation (upon which all our hopes of eternal happiness depend) displayed in its original purity, and rendered easy, pleasant, and profitable to every capacity, both with respect to faith and practice'. 'This valuable body of Christian divinity, and treasury of divine revelation, being the result of more than forty years study and experience (and not a hasty production, undertaken to serve pecuniary purposes) is executed in a manner far superious to other publications of this sort, and will alone form a complete universal library of divine knowledge, antient and modern'. Paul Wright was the vicar of Oakley and rector of Snoreham in Essex, previously of Pembroke Hall, Cambridge, an author of 'other learned, pious, and useful works, universally approved of by Christians of every denomination'.This Bible contains the Old and New Testaments with the Apocrypha bound between the Testaments. It is complete including frontis and title page. Bound in the original full leather binding , 6 raised bands on the spine. Original leather bound, untouched since 1st. printed; Published by Alex. Hoggs 1792 An extremely scarce copy of this large and engaging family bible.

The Self Interpreting Bible 1815 Folio

by John Brown. Published by R. Evans;- London 1815. Folio;- Many stunning Illustration throughout the complete Bible;- Original brown polished leather with many decorations & lines in gilt to the front and back covers and gilt lettering and gilt decorations across the spine. the Old testament is dated 1815, while the New Testament is dated 1819 but is Published by Thomas Kelly;- London.