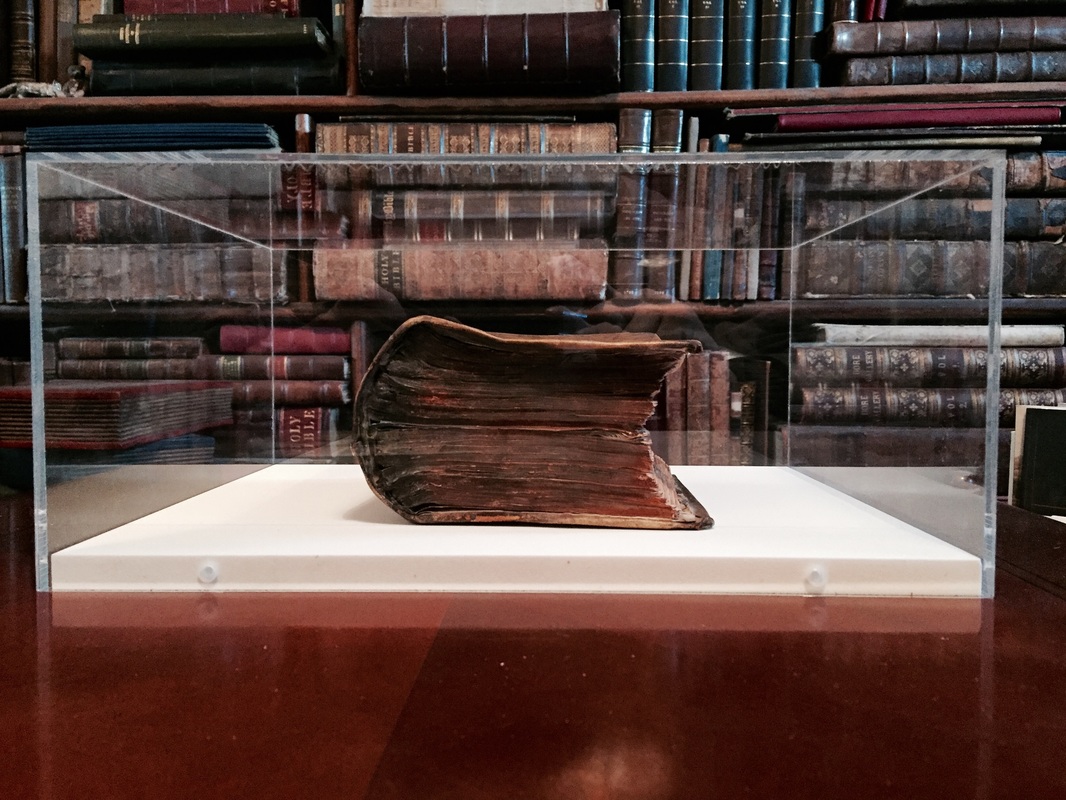 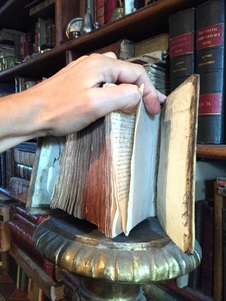 Fairly clean throughout, with old antiquarian hand written notes on a few pages. 39 illustrations to the last 100 pages. The 39 woodcuts include small woodcuts of the Four Evangelists, The Day of Pentecost, St. Paul, St. Peter, St. James, and 22 larger woodcuts to illustrate Revelation. Also the 2 woodcuts of the 2 Title-Pages.
A full page contains 33 lines and there are  423 pages within, printed both side so that is 846, including the two title pages. References, subject-headings, and notes- a few of the last in roman type-appear in the margins. There are Prologues ( Chiefly based on Luther’s ) to all the Epistles; that before Romans fill 34 pages. The Woodcut border of the first title page is framed with a blank shield at the base. That of the second title differs slightly, and the shield bears three graving tools and the initials M K, i.e. Martin de Keyser., Antwerp, Merten de Keyser (born Martin Lempereur; died 1536) was a 16th-century French printer and publisher working mainly in Antwerp,  (Present day Belgium)  for a long time in the 16th. century, Antwerp was part of the Netherlands, the Low Countries -  Merten de Keyser  printed the first complete French and the first complete English Bible translations as well as a number of works by English Protestant Authors. He died in 1536.
The Tyndale New Testament of Our Lord Jesus Christ of 1534 is complete in every way, with 423x2 pages,(846) and with no facsimiles pages within, none of the pages are trimmed  but the printing is very near the edges of many pages,  and all pages are whole with minor cuts and tears and creases, all pages are whole and no repairs appear anyway on or in the book, though the pages are very fragile and aged brown to the edges, a few, very minor hidden glue repairs to the spine when some of the pages appeared to separate from the spine, which would be normal to stabilise and protect the loss of pages and keep the book together. There are a few old antiquarian hand-written notes throughout and in the margins,  but they do not interfere with the text. The aged brown leather parchment Binding appears to be original with a few faded scribbles and a hand-written lettering to the front and back covers, the spine is dark and dirty with age, with a hand-written name of Tyndall (spelled "Tyndall", rather then Tyndale) and the date, 1534 scrawled across the spine. The end papers are in situ and appear to be burnt to the edges as does a few of the edges of the book. The pages are very fragile and aged browned to all the edges, many creased. One of the end pages to the back of the book has antiquarian notes in a neat hand, to a blank page. Considering the age and rarity of this Book, its really in fine collectable condition. We at Felix Rare Books would be looking at serious offers for this unique,  New Testament of Our Lord Jesus Christ;- Published in1534 by William Tyndale/ Martin de Keyser.

In 1533, Henry VIII appears to have entrusted John Leland with a document, "a moste gratius commission" (or principis diploma as he called it in Latin), which authorised Leland to examine and use the libraries of all religious houses in England.  Leland spent the next few years travelling from house to house, for the most part shortly before they were dissolved, compiling numerous lists of significant or unusual books in their libraries. About 1535,

In 1536, not long after the First Suppression Act  commanding the dissolution of lesser monasteries was passed, Leland lamented the spoliation of monastic libraries and addressed Thomas Cromwell in a letter seeking aid for the rescue of books. He complained that

"The Germans perceive our desidiousness, and do send daily young scholars hither that spoileth [books], and cutteth them out of libraries, returning home and putting them abroad as monuments of their own country.”

In the 1530s and 1540s, the royal library was reorganised to accommodate hundreds of books that were previously kept in monastic collections. John Leland himself describes how Henry's palaces at  Greenwich, Hampton Court and Westminster, were adapted for the purpose. John Leland's part in this is uncertain. In humanist fashion, Leland styled himself antiquarius, a title which was at one time interpreted as referring to a formal appointment as "king's antiquary": however, it is now understood to have been merely Leland's own preferred way of describing himself. There is no evidence that he personally oversaw the relocation of the books to their new home or received a librarian's wages. What he did do was to compile his lists of important volumes, and to take measures to encourage their preservation. Even after the dissolution, John Leland did not abandon his hunt for books.

The "New Testament" were  published in 1534 personally revised by Tyndale himself. Tyndale's "Pentateuch" was published at Antwerp in the Low Countries;-  by Merten de Keyser in 1530. His English version of the book of "Jonah" was published the following year. This was followed by his revised version of the book of Genesis in 1534. Tyndale translated additional Old Testament books including Joshua, Judges, first and second Samuel, first and second Kings and first and second Chronicles, but they were not published and have not survived in their original forms. When Tyndale was martyred these works came to be in the possession of one of his associates, a  John Rogers. These translations would be influential in the creation of the Matthew Bible which was published in 1537.

Tyndale used a number of sources when carrying out his translations of both the New and Old Testaments. When translating the New Testament, he referred to the third edition (1522) of Erasmus’s Greek New Testament, often referred to as the Received Text. Tyndale also used Erasmus' Latin New Testament, as well as Luther’s German version and the Vulgate. Scholars believe that Tyndale stayed away from using Wycliffe's Bible as a source because he didn’t want his English to reflect that which was used prior to the Renaissance. The sources Tyndale used for his translation of the Pentateuch however are not known for sure. Scholars believe that Tyndale used either the Hebrew Pentateuch or the Polyglot Bible, and may have referred to the Septuagint. It is suspected that his other Old Testament works were translated directly from a copy of the Hebrew Bible. He also made abundant use of Greek and Hebrew grammars.     View Bible

Top of Page
Back to rare Bibles