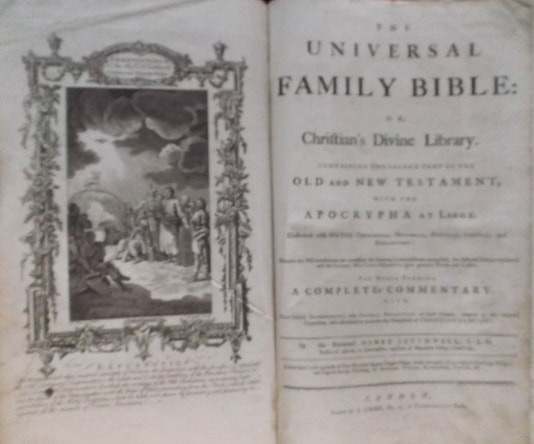 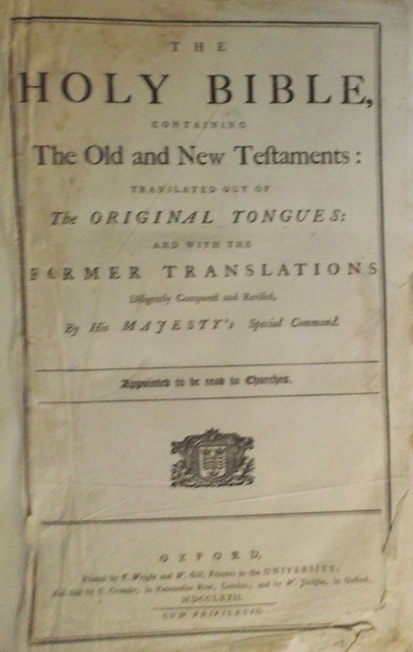 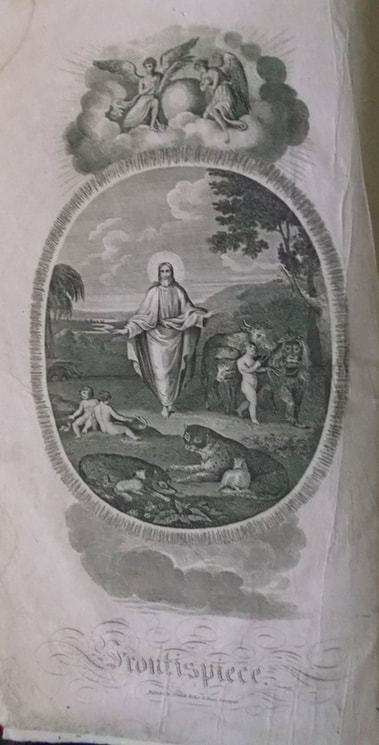 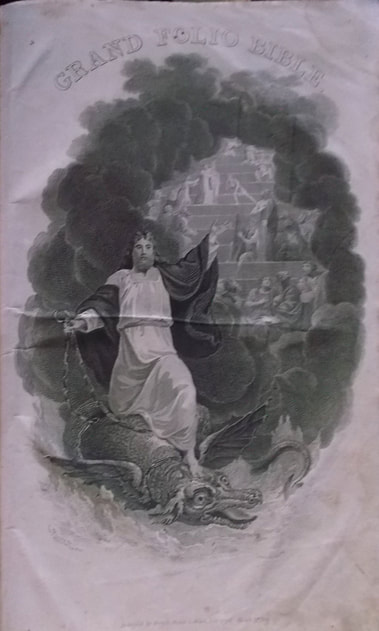 The Holy Bible 1781
Published by W. Jackson and A. Hamilton;- Oxford, The Clarendon Press 1781... NOW THIS BIBLE IS NOT LISTED IN HERBERT IT DOES NOT EXIST. BUT THERE WERE 3 COPIES PRINTED AS A SPECIAL ORDER. SO HERBERT DID NOT LIST IT...ITS THE RARIST BIBLE AROUND. The Oxford University have no copy..This is the only one in Private Hands. 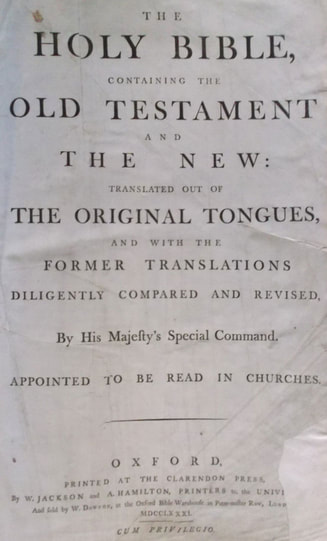 Introduction
To the most high and mightie Prince, James by the grace of God King of Great Britaine, France and Ireland, Defender of the Faith, &c. The translators of The Bible, wish Grace, Mercie, and Peace, through Jesus Christ our Lord. 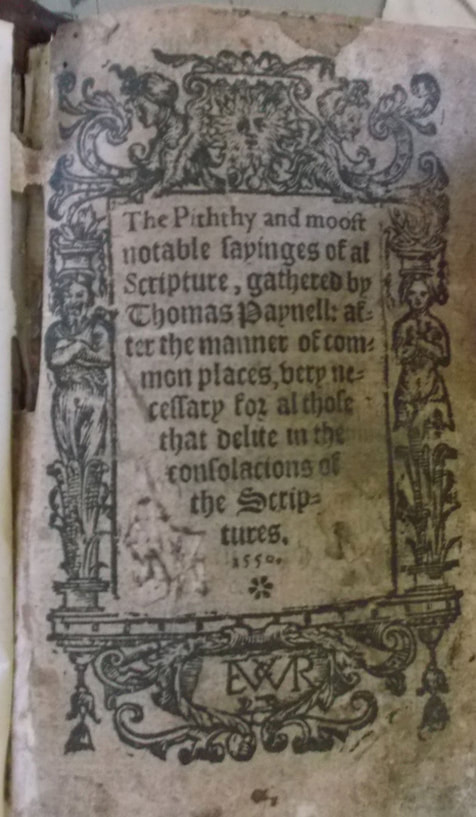 The Piththy;-
by Thomas Paynell The piththy [sic] and moost notable sayinges of al scripture, gathered by Thomas Paynell: after the manner of common places, very necessary for al those that delite in the consolacions of the scriptures. Paynell, Thomas. [Imprinted at London: At Flietbridge by Thomas Gaultier, at the costes [and] charges of Rychard Kele dwelling in the Poultrye], 1550.

The rareness of this book is 1. that it is printed in 1550, 2. That it has the complete New-Testament in English by A Catholic Friar. The Book is the only know copy in Private Hands. So very Rare;- PAYNELL, THOMAS (fl. 1528–1567), translator, was an Austin friar, educated at Merton Abbey, Surrey, where he became a canon. He then proceeded to the college of St. Mary the Virgin, Oxford, which was designed for the education of the canons of certain Augustinian houses, of which Merton was one .

He subsequently returned to Merton, and devoted himself to literary and medical studies. His first book, an edition of the ‘Regimen Sanitatis Salerni,’ appeared in 1528, and from that date Paynell's activity as a translator was incessant.

In 1530 a Thomas Paynell was admitted member of Gray's Inn (FOSTER, Register, p. 8). On 13 April 1538 Merton Abbey surrendered to the crown, and its inmates received pensions. Paynell accepted 10l. per annum.
On 16 Oct. in the same year Paynell was licensed to export from England five hundred woollen cloths, and in December he was despatched, with Christopher Mount , on a mission to the protestant princes of Germany; he was present at the diet of Frankfort on 12 Feb. 1539 (State Papers Henry VIII, i. 604–6, 609, 614).

Before 1541 he had become chaplain to Henry VIII, perhaps as a reward for diplomatic services. He seems to have escaped molestation on account of his religious opinions, and remained in favour with Edward VI, Mary, and Elizabeth, to all of whom he dedicated books. Among others to whom his dedications are addressed were Mary (1496–1533) , queen-dowager of France, John de Vere, fifteenth earl of Oxford ], Anthony Browne, first viscount Montague , the lord chamberlain, and William Blount, fourth lord Mountjoy.

He was also an intimate friend of Alexander Barclay [q. v.], the author of the ‘Ship of Fools.’ He is probably the Thomas Paynell who resigned the living of St. Dionys, Lime Street, London, on 13 Feb. 1549–50 and succeeded his friend Richard Benese at All Hallows, Honey Lane, which he resigned before 21 Feb. 1560–1.

The latest mention of him appears in the ‘Stationers' Register’
in December or January 1567–8.

The Bishops' Bible is an English Translation of the Bible which was produced under the authority of the established Church of England in 1568. It was substantially revised in 1572, and this revised edition was to be prescribed as the base text for the Authorised King James Version of 1611 The thorough Calvinism of the Geneva Bible (displayed in the marginal notes more so than in the translation itself) offended the high-church party of the Church of England, to which almost all of its Bishops subscribed. They associated Calvinism with Presbyterianism which sought to replace government of the church by bishops (Episcopalian) with government by lay elders. However, they were aware that the Great Bible of 1539 —which was the only version then legally authorized for use in Anglican worship—was severely deficient; in that much of the O.T. and Aprocrypha was translated from the Latin Vulgate, rather than from the original Hebrew, Aramaic and Greek. In an attempt to replace the objectionable Geneva translation, they circulated one of their own, which became known as the Bishops' Bible. The promoter of the exercise, and the leading figure in translating was Matthew Parker, Archbishop of Canterbury. It was at his instigation that the various sections translated by Parker and his fellow bishops were followed by their initials in the early editions. For instance, at the end of the book of Deuteronomy, we find the initials "W.E.", which, according to a letter Parker wrote to Sir William Cecil, stands for William Alley, Bishop of Exeter. Parker tells Cecil that this system was "to make [the translators] more diligent, as answerable for their doings." Unhappily, Parker failed to commission anyone to act as supervisory editor for the work completed by the various translators—and was too busy to do so himself, and accordingly translation practice varies greatly from book to book. Hence, in most of the Hebrew Bible (as is standard in English Versions) the tetragrammaton YHWH is represented by "the Lord", and the Hebrew "Elohim" is represented by "God". But in the Psalms the practice is the opposite way around. The books that Parker himself worked on are fairly sparingly edited from the text of the Great Bible, while those undertaken by Grindal of London emerged much closer to the Geneva text. In this edition, Elizabeth is flanked by allegorical virtues of Faith and Charity Elizabeth therefore represents Hope. Beneath the portrait is a latin text from Romans 1;16. The Bishops' Bible was first published in 1568, but was then re-issued in an extensively revised form in 1572. In the revision a number of switches were made to the New Testament in the direction of more "ecclesiastical" language (e.g. introducing the term "charity" into I Corinthians 13), but otherwise to correct the text more in line with that found in the Geneva Bible; and in the Old Testament, the Psalms from the Great Bible were printed alongside those in the new translation—which had proved impossible to sing. From 1577 the new psalm translation was dropped altogether; while further incremental changes were made to the text of the New Testament in subsequent editions. The Bible had the authority of the royal warrant, and was the second version appointed to be read aloud in church services (cf. Great Bible, King James Bible). It failed to displace the Geneva Bible as a domestic Bible to be read at home, but that was not its intended purpose. The intention was for it to be used in church as what would today be termed a pulpit Bible. The version was more grandiloquent than the Geneva Bible. The first edition was exceptionally large and included 124 full-page illustrations. The second and subsequent editions were rather smaller, around the same size as the first printing of the King James Bible, and mostly lacked illustrations other than frontispieces and maps. The text lacked most of the notes and cross-references in the Geneva Bible, which contained much controversial theology, but which were helpful to people among whom the Bible was just beginning to circulate in the vernacular. The last edition of the complete Bible was issued in 1602, but the New Testament was reissued until at least 1617. William Fulke published several parallel editions up to 1633, with the New Testament of the Bishops' Bible alongside the Rheims New Testament, specifically to controvert the latter's polemical annotations. The Bishops' Bible or its New Testament went through over 50 editions, whereas the Geneva Bible was reprinted more than 150 times. This beautiful Folio is complete, with stunning illustration of The Queen and other important persons throughout.The translators of the King James Version were instructed to take the 1602 edition of the Bishops' Bible as their basis, although several other existing translations were taken into account. After it was published in 1611, the King James Version soon took the Bishops' Bible's place as the de facto standard of the Church of England. Later judgments of the Bishops' Bible have not been favorable; David Daniell, in his important edition of William Tyndale's New Testamnet, , states that the Bishops' Bible "was, and is, not loved. Where it reprints Geneva it is acceptable, but most of the original work is incompetent, both in its scholarship and its verbosity". Unlike Tyndale's translations and the Geneva Bible, the Bishops' Bible has rarely been reprinted. The most available reprinting of its New Testament portion (minus its marginal notes) can be found in the fourth column of the New Testament Octapla edited by Luther Weigle, chairman of the translation committee that produced the Revised Standard Version. The Bishops' Bible is also known as the "Treacle Bible" because of its translation of Jeremiah 8:22 which reads "Is there not treacle at Gilead?", a rendering also found in several earlier versions as well such as the Great Bible.In the Authorized Version of 1611, "treacle" was changed to "balm". the Bible is complete with restored original binding, and new endpapers,

Tyndale's English Translation
of the New Testament 1535
Biblia. The Bible that is, the Holy Scripture of the Olde and New Testament. Translated by Miles Coverdale. [Marburg: Eucharius Cervicornus and Johannes Soter?], 1535. The first edition of the complete Bible in English followed more than a century of strict prohibition against English translations of the scriptures. Although William Tyndale’s pro-Lutheran translation from the original Hebrew and Greek had been suppressed during the preceding decade, Henry VIII’s break with the Church of Rome in 1534 suggested that the publication of a new English translation might gain royal support. Miles Coverdale (c. 1488–1569) compiled this text from Latin and German versions, and more of Tyndale’s prose than anyone at the time would admit. Dedicated to the king with a title page that shows him handing the Bible down to his church and court officials, the Coverdale Bible earned the king’s verbal consent: “If there be no heresies, then in God’s name, let it go abroad among our people.” this edition is not complete, nevertheless its very collectable as is, hence the price I ask for it. Rebound in the Victorian times, nicely done some gilt tooling and scroll work to the leather, front and back..A tight clean copy of a rare BIBLE.

The Byble which is All the Holy Scripture. Edited by John Rogers. [Antwerp?: Matthew Crom for Richard Grafton and Edward Whitchurch], 1537. Although the first English Bible issued with royal license claims a “Thomas Matthew” as its translator, this was a pseudonym for John Rogers (1500–1555), who compiled most of the text from earlier translations by Tyndale and Coverdale. His extensive marginal notes reflected his reliance on Martin Luther and Erasmus, as well. In 1538-39 the “Matthew’s Bible” provided a principal source for the “Great Bible.” again not all there, but only missing two last pages, some spotting, slight soiling, a few wormholes very minor, no loss of text. Rebound Black leather, highly polished, some gilt tooling both to the front and back covers. Still very Rare; It would be impossible to get a complete copy, hence the value I set;- 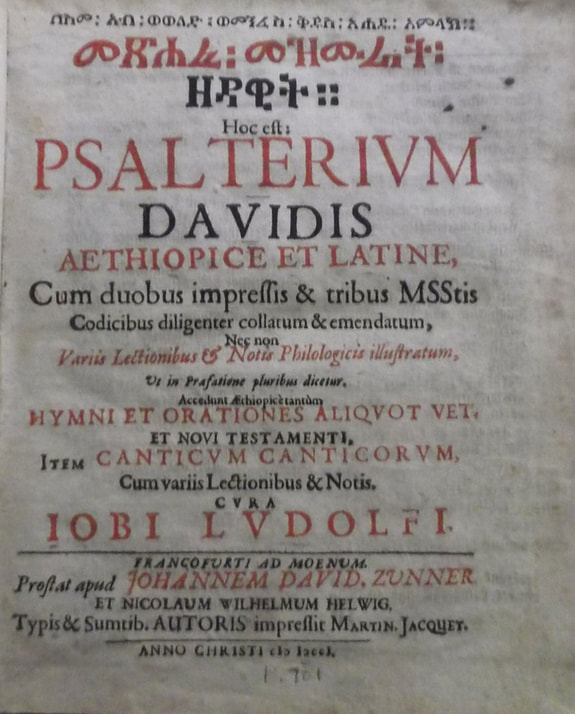 The Holy Bible 1781Published by W. Jackson and A. Hamilton;- Oxford, The Clarendon Press 1781. Elephant Folio, with original brown leather binding, Holy Bible in a red label to the front cover. The Dates to the OT and NT is the same 1781;- NOW THIS BIBLE IS NOT LISTED IN HERBERT IT DOES NOT EXIST. BUT THERE WERE 3 COPIES PRINTED AS A SPECIAL ORDER. SO HERBERT DID NOT LIST IT.ITS THE RARIST BIBLE AROUND. The last page has A Table of Kindred and Affinity, wherein whosoever are Related are Forbidden in Scripture and our Laws to Marry together;- A Man many not Marry his...A List..
and A Woman may not Marry with Her....A List..some old repairs, not effecting the text. In fine collectable edition.
The Oxford University have no copy.This is the only one in Private Hands. 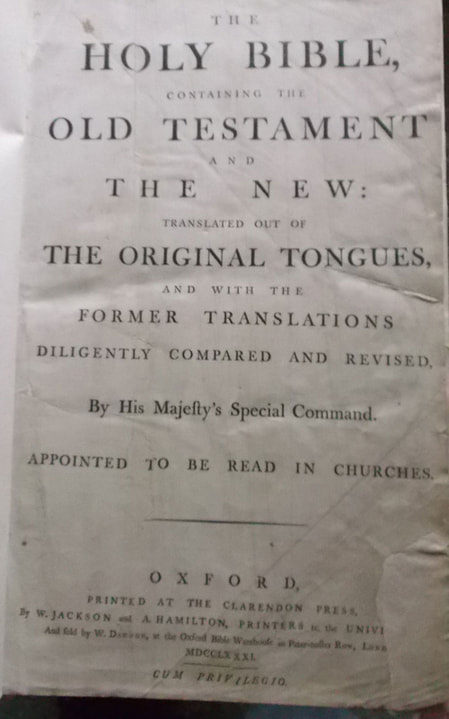 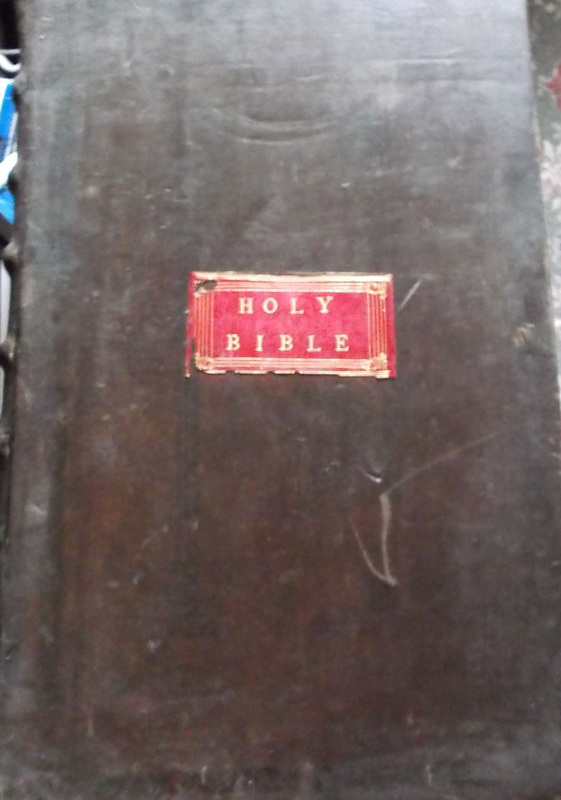 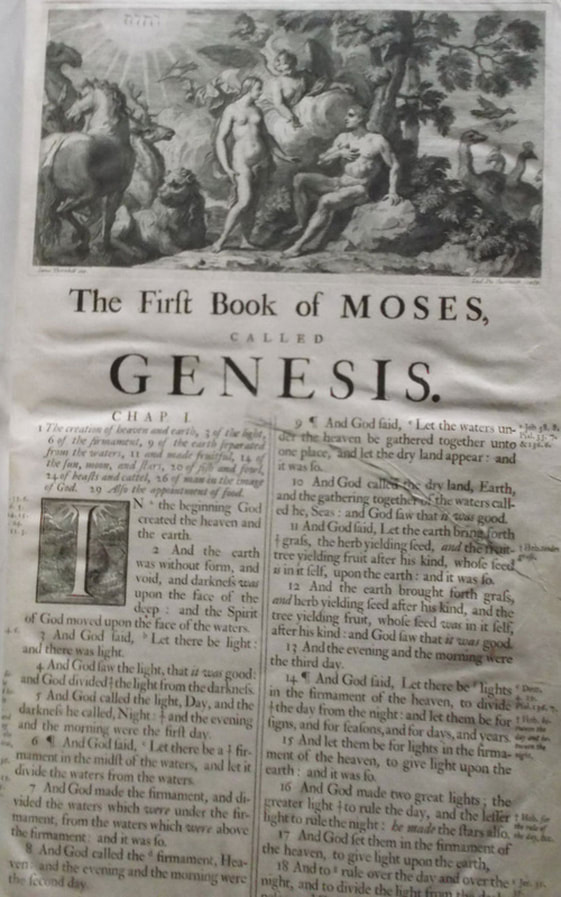