back to rare books 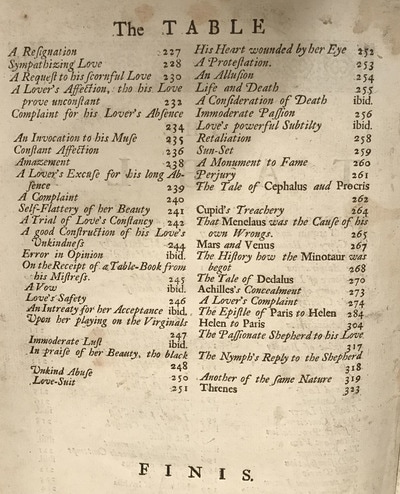 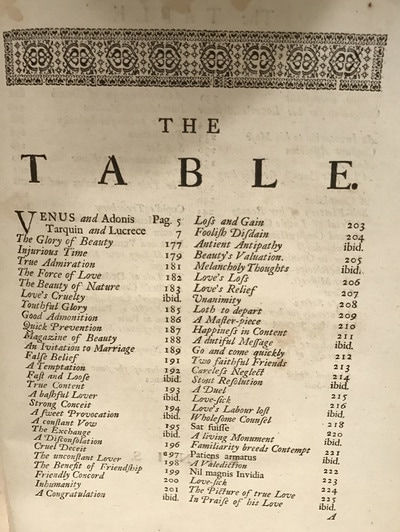 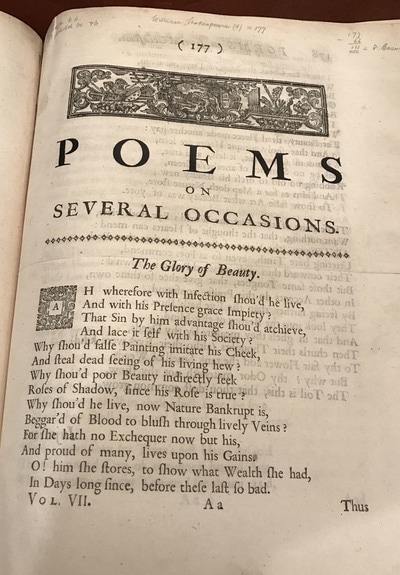 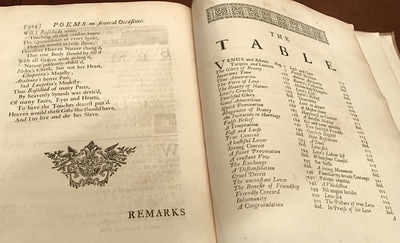 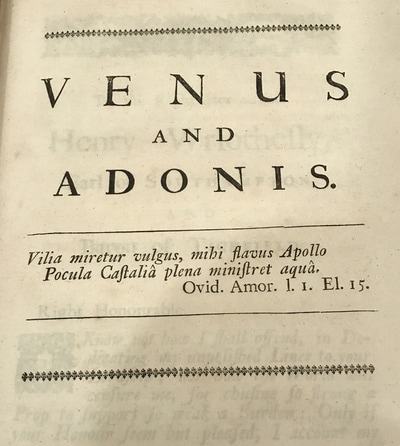 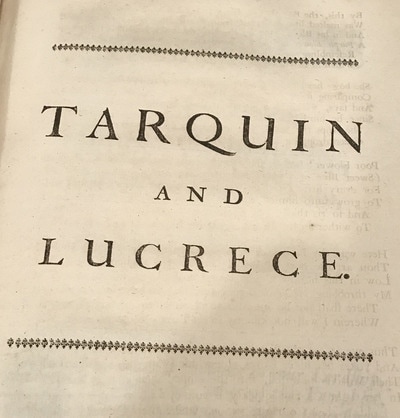 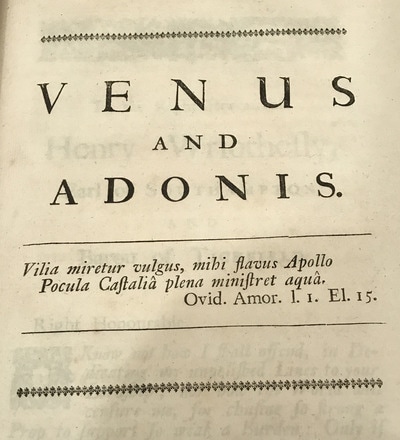 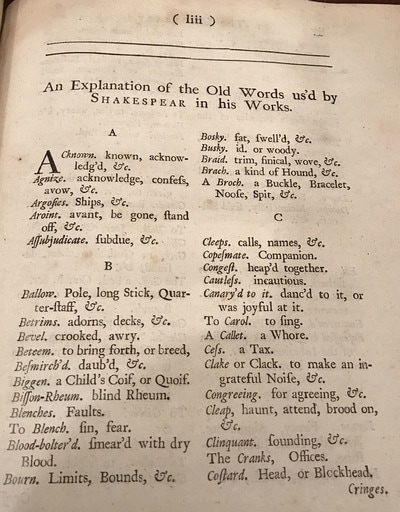 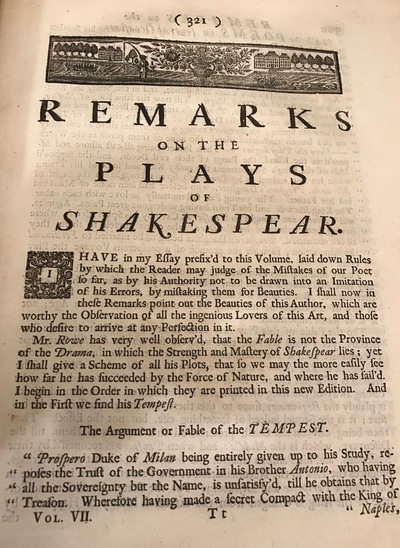 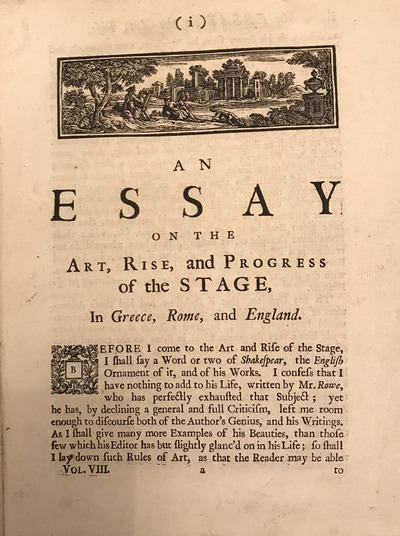 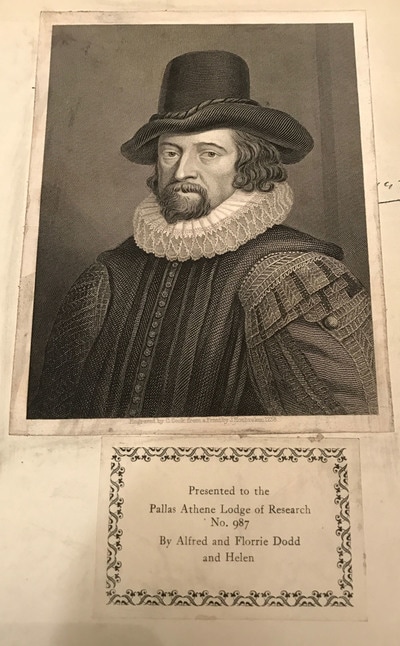 
The "Seventh" unauthorized volume of the Rowe edition: 1710


Published in London by  E. Curll at the Dial and Bible against St. Dunstan's Church, and E. Sanger at the Post-house at the Middle-Temple Gate, MDCCX [1710] Size 11 x 9ins.;- Volume the Seventh (1710), published under the imprint of Edmund Curll. ... verse in a format to match Rowe's six-volume edition of the plays;- Original brown cloth spine and brown paper covers,  A book-plate of Lord Bacon inside the front cover, the irony should not be lost on anyone, just in case, many academics believe, right or wrong that Lord Bacon wrote most of the plays and poems attributed to Shakespear;- Very Rare/Scarce Edition...


18th. century Editions of the Poems of William Shakespeare, begins with two which appear in 1710, one published by Lintott, the other by Curll. The Text of the former is based on the various originals including the Sonnets Quarto of 1609 and The Passionate Pilgrim; the Text of the latter is from the garbled collection made by Benson in 1640. But Curll’s issue, though less fortunate in its sources is the more important for history of the Text, as it was followed by the later editors, like Sewell and Ewing, until Malone led the way back to the more authoritative early editions. A revised edition appeared in 1714.
The Curll volume of 1710 bears the following title; “ Works of Mr. William Shakespere. Volume the Seventh;- Containing Venus & Adonis, Tarquin & Lucrece and His Miscellany Poems. With Critical Remarks on his Plays, &c. to which is Prefix’d an Essay on the Art, Rise and Progress of the Stage in Greece, Rome and England. The significance of the “Volume the Seventh”, as has been generally understood, is in the fact that the book was intended as a supplementary volume to be sold to purchasers of the set of Rowe’s Works of Shakespeare.
There has been considerable uncertainty as to the Editor of the volume, some authorities referring it to Charles Gildon, known to be the author of the essays it contains, others to a mysterious “S. N.” ( Sine Nomine)( Without a name)  because in some copies those initials are attached to the dedication. In the Cambridge Shakespere, and certain other editions based on it, the readings of the Curll text of 1710 are referred to Gildon, and Sir Sidney Lee calls him “ the Editor of the supplementary volume of 1710.


The Curll volume of 1710 Works of Mr. William Shakespare;- Volume the Seventh, Size 11 x 9ins.  A highly important Edition of Shakespeare's works. Through the editorship of Nicholas Rowe, himself a renowned dramatist, a long list of “firsts” is attributable to this Edition.


1. No Title Page- an engraved image to the top of the opening page, then An Essay on the Art, Rise, and Progress of the Stage in Greece, Rome, and England. At the end of the page on the left side is VIII. which only runs to 17 pages after that, Than the rest is Vol.VII to the end of the book.


2.   Then odd numbers, page 321 starts—- Remarks on the Plays of Shakespear  and finished on page 454. Vol. VII bottom left side of the title page.


3.  Followed by——An Explanation of the Old Words us’d by Shakespear  in his Works… 5 pages of The Glossary Vol. VII bottom left side of the last page  of The Glossary and in centre is the letter H…and then VENUS.


4.  Separate Title Page —- Venus and Adonis—- Villa miretur vulgar, mihi flavus, Apollo Pocula Castalia plena ministret aqua. Ovid. Amor. I.1. EI. 15. Followed by the next page, an engraved plate to the top of the page and—- To the right Honourable Henry Wriothefly, Early of Southhamton, and Baron     of Tichfield.— Letter back and front with Will. Shakespear to the end of the page. —-Venus and Adonis—— starts on page 5. Followed by another engraved plate to the top of page 5  and Venus and Adonis. Finishes on page 44. End of the page 44 to the right TARQUIN.


5. Separate Title-Page —- Tarquin and Lucrece—— Following next page, an engraved plate to the top of the page and—- To the right Honourable Henry     Wriothefly, Early of Southhamton, and Baron of Tichfield.—- Letter back         and front with Will. Shakespear to the end of the page. After that an  engraved plate to the top of page 7;- and then —Tarquin and Lucrece——        and runs to 66 pages, at the end of page 66 on the bottom right of the page  is POEMS.


6.  Starts on page 77 with an engraved plate to the top of page —-Poems on Several Occasions—The Glory of Beauty—1st. poem. VII end of the page, left side.  Finishes on 324 with The Poem Threnes—then a small woodcut to the bottom of the page 324;-


7. An engraved banner followed by—- The Table—-front and back of last page, ending in —FINIS—- 106 Poems in Total;-  Shakespear  wrote 37 plays,  154 sonnets, and 5 long narrative poems, including "Venus and Adonis",  "The Rape of Lucrece", "The Passionate Pilgrim", "The Phoenix and the Turtle", and "A Lover's Complaint"

There was a seventh unauthorized volume added to the Rowe edition in 1710, published by the unscrupulous printer-publisher Edmund Curll.  Because Rowe's edition did not include the poetry, Curll seized upon the opportunity to issue a volume with the same appearance of the original Tonson volumes.  He employed Charles Gildon to "edit" the volume, with long-lasting consequences for subsequent editions of the Sonnets.  The "rapacious" Gildon was the quintessential eighteenth century hack.  He worked quickly, with liberal invention and little regard for factuality.  To pad the volume, Gildon added his own "An Essay on the Art, Rise and Progress of the Stage in Greece, Rome and England;" and "Remarks on the Plays of Shakespeare."  "Charles Gildon thus became the first critic to write an extended critical commentary on all the works of Shakespeare..."


For reasons known only to Gildon, and perhaps not to him, he used the 1640 Benson text for the Sonnets, rather than the 1609 Thorpe text  [i.e., POEMS:
VVRITTEN BY WIL. SHAKESSPEARE. Gent. Printed at London by Tho. Cotes, and are to be sold by John Benson dwelling in St. Dunstans Church-yard. 1640;  The Benson text "...combined most of Shakespeare's sonnets (numbers 18, 19, 43, 56, 75, and 76 are omitted), mingled with poems from The Passionate Pilgrim (the corrupt 1612 edition), plus A Lover's Complaint, The Phoenix and the Turtle, Milton's poem to Shakespeare from the Second Folio, poems by Ben Jonson, Francis Beaumont, Robert Herrick and others, and miscellaneous pieces"  Benson also rearranged some of the sonnets and gave them fanciful titles:


"Why Benson omitted eight sonnets remains a mystery, but perhaps they were simply lost in the shuffle: Benson did not print them in the familiar numerical sequence (still used today) of the 1609 edition, but regrouped them under new titles. Benson does, however, include many poems not written by Shakespeare at all, but by his contemporaries ChristopherMarlowe (“Come live with me and be my love”), Ben Jonson, Thomas Heywood, John Fletcher, Sir Walter Raleigh, and several latter-day authors of light, witty, amorous verse, known as the “Cavalier” poets" Because Curll's venture succeeded, this became the standard arrangement of the Sonnets until the late eighteenth or early nineteenth century:


"Until 1780 no edition of the collected poems printed in England...contained the genuine Sonnets in their original form.  During most of the 18th century, therefore, the only form in which a person could buy the Sonnets was in the deformed Benson version, which would have died quietly in 1640 if Curll had not dug it up and given it a new life"


For the 1714 "second edition" of Rowe's Shakespeare (known as "Rowe 3") Tonson brought Curll into the venture, making it nine volumes rather than eight, "and including Curll's name on the imprint"


Gildon's unscrupulous activities, numerous works, and incessant conflicts with eighteenth century literati make a fascinating story, but go well beyond the scope of Shakespeare studies.  More to the point, a very entertaining review of  Gildon’s Shakesperean ‘edition’ of the poetry can be found in Samuel Butler's Shakespeare’s Sonnets.

top
back to rare books